And it’s a wrap! Report from ‘Dream on the Streets’ filming day 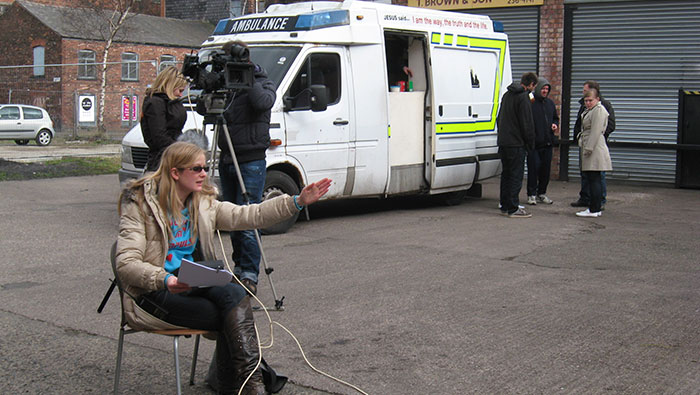 Our next production, ‘Dream on the Streets, ’ is multi-media, with 6 of the scenes on film. Filming took place on Saturday 27th March, at The Mustard Tree, Manchester. Crew and cast set to, alongside Mustard Tree’s Jim Kilty, sweeping out the builder’s debris from the unfinished room we’d earmarked for wardrobe and makeup.

Ben Critchly, Art Director from ‘Under the Tracks’ , created a solicitor’s office out of a corner of the lounge space. Fiona Butterworth, our make-up and hair artist, mentored Mazi P and Liz Banks, and between them they transformed our actors into their characters, aided by Sue Tomlinson in the wardrobe department. We have to thank Mustard Tree’s Dignity Project for supplying most of our costumes, and even during the filming we were nipping down to the store to source handbags, trousers and shoes. We’re very pleased with Bottom’s transformation into an ass but you’ll have to see the performance to see how we do it! Steve Brown looks remarkably good with ears and a tail…

A hearty breakfast was served up by Julie and Laura Brady – thank you chefs, you did a fantastic job of location catering!

Finally filming got underway. Phil Wood, who was the Director of Photography for Under the Tracks, was on board again, assisted by Michelle Aubon, to be seen perilously balancing on chairs wielding the sound boom.

Darlington was in 5 of the 6 scenes and he never flagged, showing amazing energy, agility and inventiveness as he pranced around as Puck. Clare and Benji exuded charisma and elegance as Hippolyta and Theseus, and the frisson between them as Titania and Oberon was tangible. Mustardseed (Ian), Titania’s personal security guard, kept a close eye on proceedings. 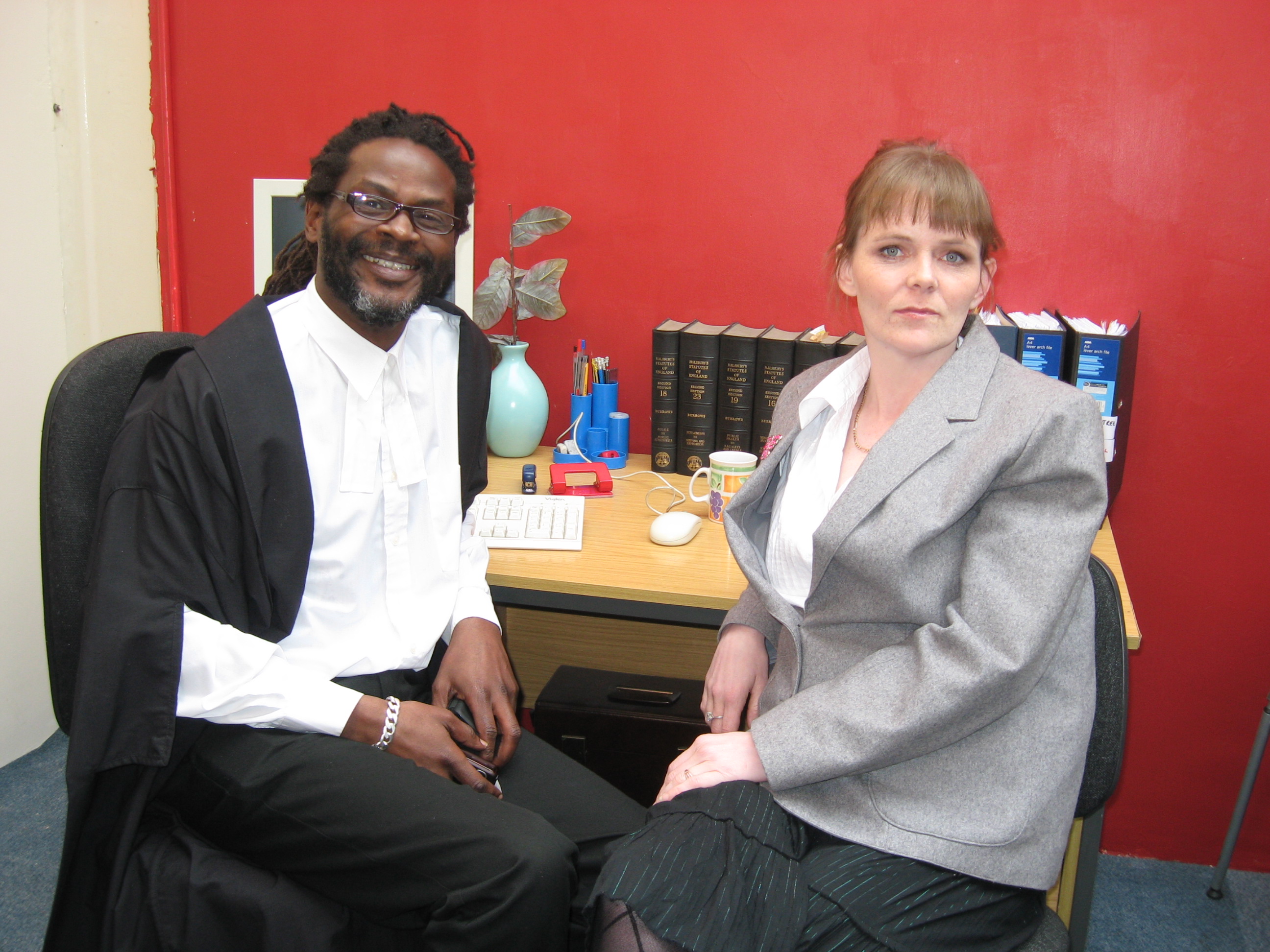 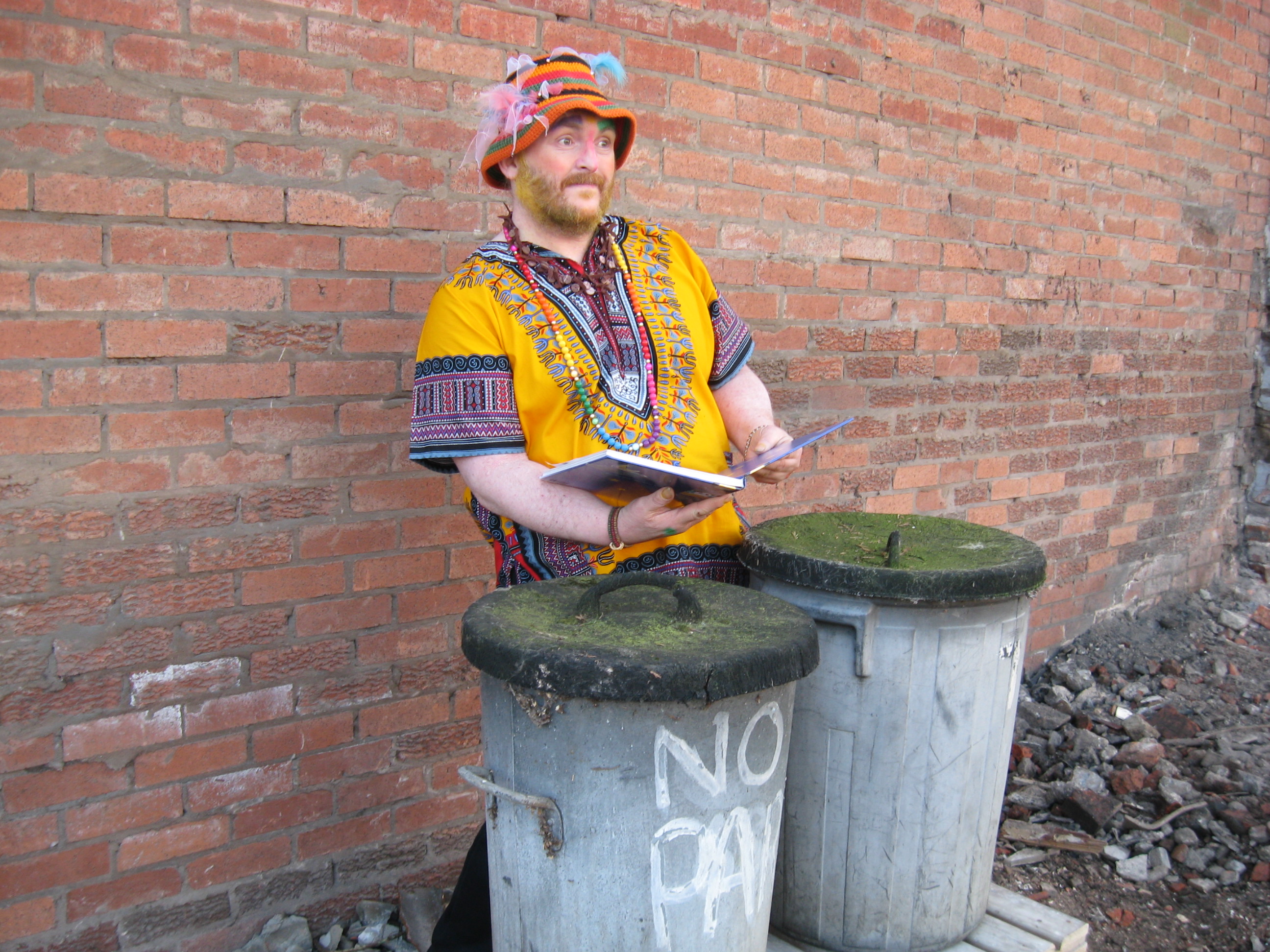 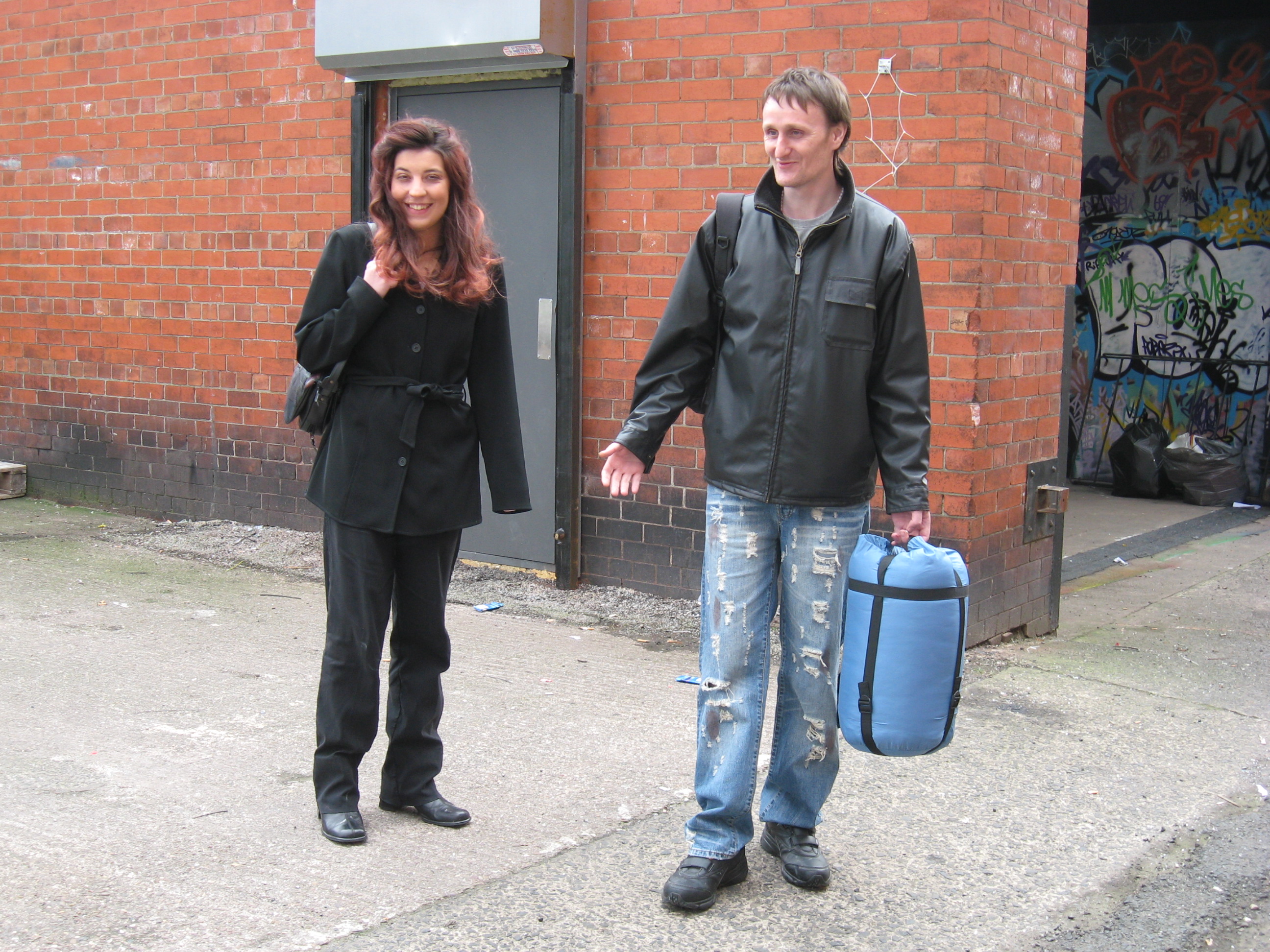 Hermia and Lysander looking for a pitch 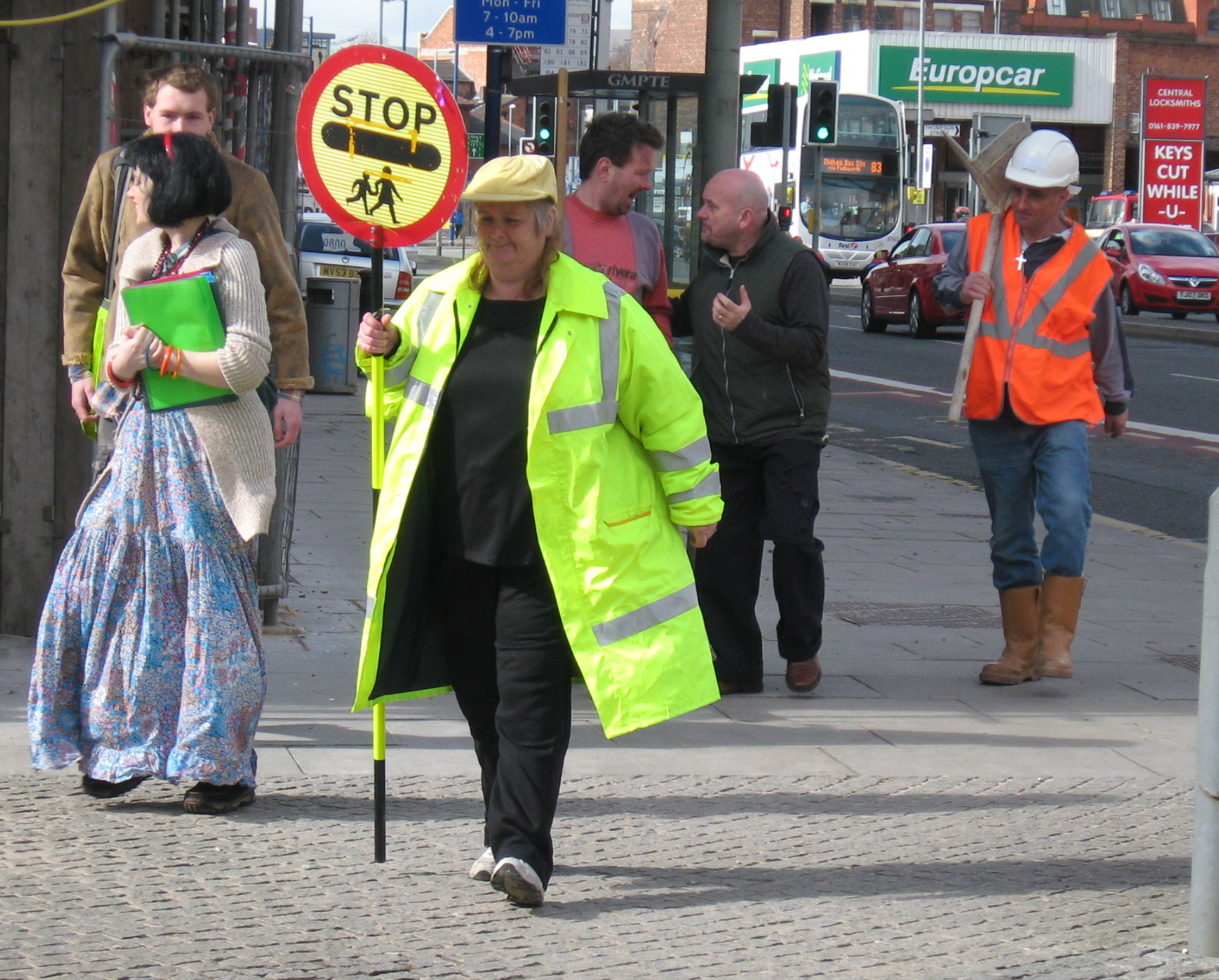 Six street actors in search of a rehearsal space 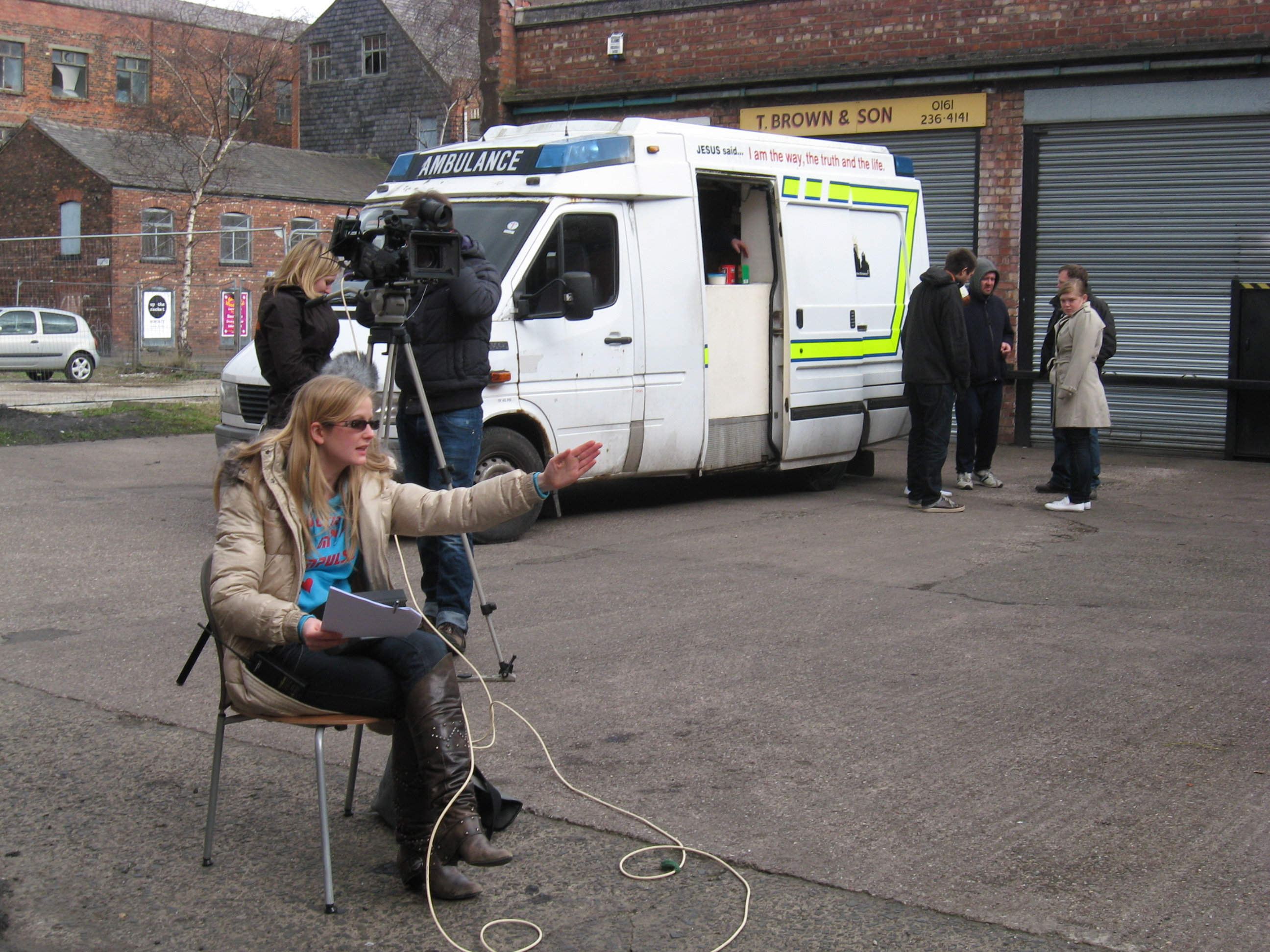 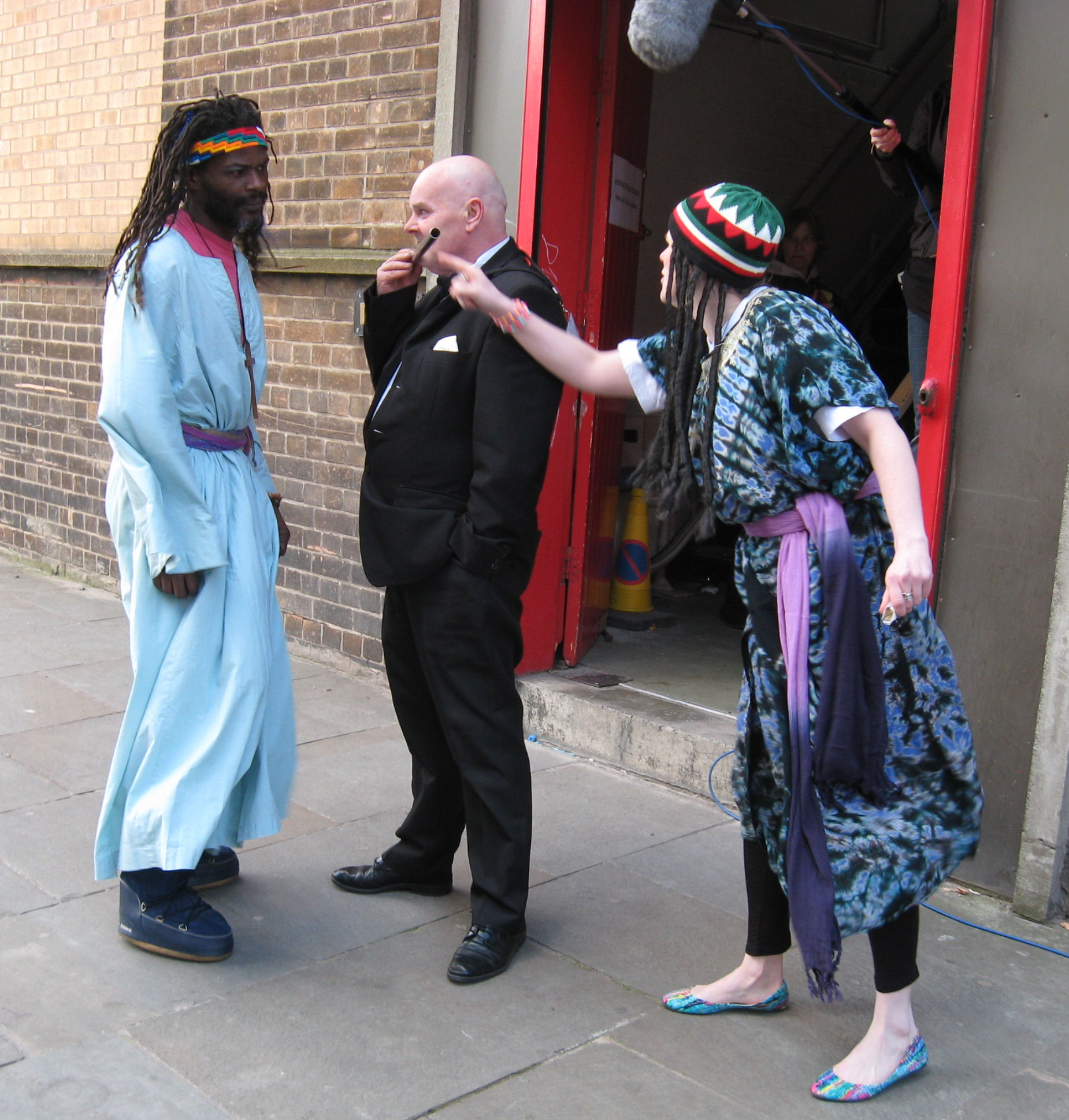 The 6 street actors exploded onto the scene from outside the building: a lollypop lady, a road sweeper, a brickie, a news vendor and a factory worker, herded by the neurotic Peta Quince. With their hods, hard hats, lollipop signs and large brooms, we fully expected them to burst into a rendering of ‘YMCA!

By lunch (delicious!) we were running behind, but the afternoon shoot went smoothly and we finished on schedule. Despite recovering from knee surgery, Antonella as Hermia survived being dragged by the ear by her Dad, Egeus (Kenny), and sleeping rough on the streets with Lysander (Danny).

Outside, Hermia and Lysander were trying to settle down for the night against a brick wall. But filming proved impossible because of a rhythmic metallic clattering emitting from the other side, accompanied by an equally raucous musical backing blasting out from a radio. Lauren, our producer and director, sent people off to investigate the noise and we found a squad of graffiti artists, hard at work, shaking their tins up and down and spraying a psychedelic mural. It was a graffiti workshop on an equally tight schedule, but eventually we negotiated a series of ceasefires in which to film.

What a brilliant day. Well done cast and crew, you were all stars! Can’t wait to see the final edit, but for now it’s back to our Sunday rehearsals, with loads more lines to learn!