REHEARSING FOR ‘DEEP WITHIN’ 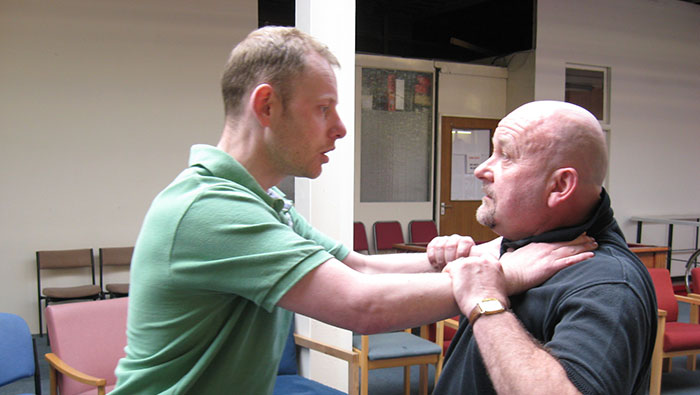 At last, we have a name for our play. It’s called ‘Deep Within’ and you can see it on Friday 18th May at The Hub, Altrincham, and Saturday 26th May at the Zion Arts Theatre, Hulme.

Let me give you the flavour of our Sunday afternoon workshops. When we arrive at the Mustard Tree to set up, one or two people always emerge from the shadows to greet us. Some of our actors are early birds, in fact they’ve been looking forward to the rehearsal all day and are determined to savour every moment. It’s a cold and windy spot outside the red door and we fumble through locks, bolts, padlocks and shutters so that we can get in and put the kettle on.

Last Sunday, a new guy came up the stairs, wondering if he could see what we’re all about. He was good at observing and sat quietly, watching the proceedings with interest. So I tried to view the afternoon’s events through his eyes. How does our diverse company of actors come over to a stranger?

It’s a barn of a place, upstairs, but there’s a café area which is the focus for greetings and catch ups. We set out the food and drink (hot cross buns today) and the actors settle in and catch up with each other. We buzz someone in and when they emerge at the top of the stairs we are amazed to see P. Last night he had rung to say he couldn’t come as he was in hospital. He’d been discharged today and he was determined not to let us down. He’s surprised to be hugged on the spot.

Then there is E, who thought no-one knew that he’d be 70 tomorrow. He’s astonished at the appearance of a birthday cake ablaze with candles, a card signed by everyone and a rousing chorus of ‘Happy birthday to you!’ He’d been given a surprise party last night and declares that this is the best day of his life.

While folk enjoy the refreshments there’s a bit of admin to sort, revised scripts to be given out and explained, release forms to be signed. For Garry, the play’s director, there’s not a minute to spare and he takes the lead actor into a side room to run through some of his many scenes.

Joe (currently appearing as First Officer Ditty on CBeebies ‘The Rhyme Rocket’) and fellow Salford Uni media student Liz, plus Jen (currently working on the production side of Holyoaks), are our assistant directors, and they begin working with groups of actors, hot seating them to help character development. Lauren (writer and producer) and Garry begin rehearsals with groups of actors in the central space. There’s a lot to get through and Garry works them hard. But there’s a terrific atmosphere of concentration and determination to get it right, with much laughter and the occasional tension. As ever I’m impressed by the energy and concentration and sheer talent of our actors. No matter what’s been happening to them during the week, they leave it behind and give us their all.

The two and a quarter hours fly by and soon it’s time to go, with Easter eggs all round and admonitions from Garry to be off script by next time. Our visitor says he’s enjoyed himself and he’ll be in touch. The next day he contacts Lauren to say he’d like to come on board. He’s most welcome.