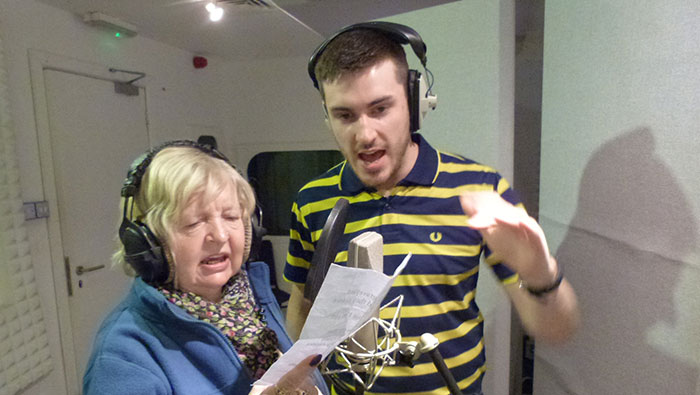 PRESS ARE INVITED TO SEND REPORTERS/PHOTOGRAPHERS TO THE FILMING OF THIS MUSIC VIDEO BY THE HOMELESS COMMUNITY,  3rd TO 5th MAY, OUTDOOR LOCATIONS IN SALFORD, HULME AND TIMPERLEY

Strange sights will greet the public on the first weekend in May. A curtained bus stop in Timperley will accommodate a homeless man, a fridge, a pot plant and a dog. Another homeless man wakes up in a graveyard. A sizable group of homeless people are on the march across wasteland in Salford. There are crazy goings on in Day Centres in Hulme, village libraries, City Centre parks and bars, not to mention a homeless leprechaun. What on earth is happening?

This is ‘Street Life’ in the making – a music video by ‘Acting on Impulse,’ a Manchester charity founded that works with socially excluded people. After three short films and two stage productions, this is their first venture into music, and the characters, concept and lyrics have been developed through workshops.  In this quirky music video, we follow a number of humorous yet hard hitting characters from the streets as they paint a picture of what life is really like.  Salford film company Finite Productions will be behind the camera and CBeebies very own Joe Chambers is directing.

With a mix of tongue in cheek action alongside genuine issues it will be a fast paced fun video which packs a punch.  The song has been professionally written and composed and recorded in a studio – and once you hear it you won’t be able to get it out of your head. It will be launched online at a screening event in June, and who knows, this could be the next ‘Gangnam Style’ – popular culture in the making.