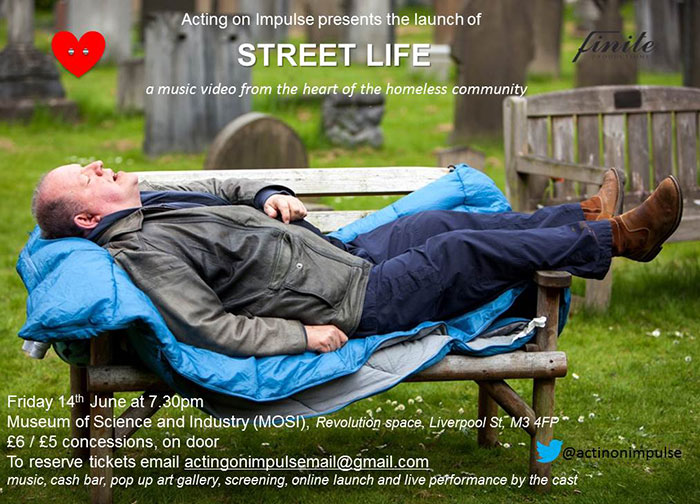 At last, after months of development, we are delighted to announce the launch of our music video ‘Street Life’! It’s being staged in the Revolution Space of the Museum of Science and Industry (MOSI) in Manchester on 14th June at 7:30.

This is the launch of no ordinary music video. ‘Street Life’ follows a group of humorous yet hard hitting characters from the streets as they paint a quirky picture of what life is really like on the margins. The difference is, the actors have been there, this is their story, their achievement, despite all that life has thrown at them. The video is their voice, a chance not only to entertain but to change public perception about homeless and marginalized people. At a time when night shelters are being closed and sleeping bags swept off the street, this is the time to listen to the genuine voice of the people behind the stories.

‘Street Life’ is presented by ‘Acting on Impulse.’ We’re a Manchester charity working with socially excluded people. Following three short films and two stage productions, this is our first venture into music, and the characters, concept and lyrics have been developed through workshops. With a mix of tongue-in-cheek action and genuine issues around homelessness, it will be a fast-paced fun video which packs a punch. The song has been professionally written, composed and recorded and the action filmed over 3 days in 12 diverse locations ranging from Salford via Hulme to Timperley. The director is CBeebies’ Joe Chambers and the video is produced by Lauren Pouchly with Salford film company Finite Productions. Earworm warning: once you hear the song you won’t be able to get it out of your head.

The actors will perform live at the event, with busker/singer/songwriter and Centrepoint Ambassador Kristyna Myles. You’ll go behind the scenes with a short film about the making of the video and then the big moment……the audience will watch the video being launched online. And for extra value, artist Ghislaine Howard will be showing her working studies towards a major series of paintings that will celebrate the activities of Acting on Impulse. This event is popular culture in the making and if it went viral, it could make a big difference to homeless people and how they are viewed.