Press Call for Help – all set to shoot!

This is a significant year for Acting on Impulse. It’s our tenth anniversary and our last series of Acting Workshops at Mustard Tree. They’re refurbishing and we thank them for their hospitality and wish them well after basing our workshops there for 7 happy years.

We’ve been working hard at our fortnightly workshops since October, led by this year’s Creative Producer Rachel Muter. Pulling the threads out of fairy tales, the one we had most fun with was Brother Grimm’s Rumpelstiltskin. The story of the lying miller who sold his daughter into slavery, her exploitation by the king and the threatened abduction of her baby daughter by the scheming magician lent itself to many interpretations for our actors to play around with. Out of it came 4 stories with contemporary themes with a script by writer Lewis Metcalfe. The working title for our film is Press Call for Help.

Filming begins this Friday, 5th May with director Jamie Shelton and Producer Luke Filz. We can’t wait to get started! The premiere is pencilled in for 1st July. 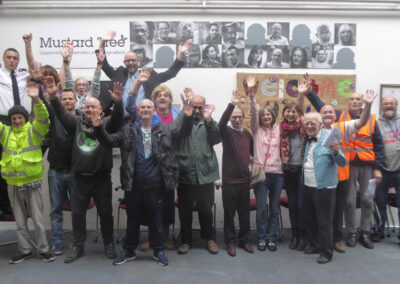 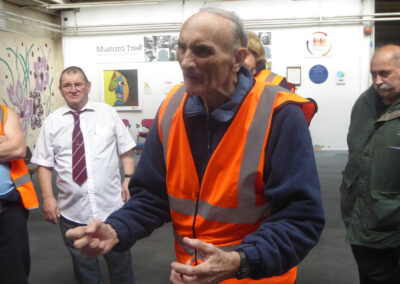 Here’s how we describe it in press release language:

For 3 days a group of 17 actors will be filming in 4 locations for a film which tackles current issues of poverty and manipulation. Countering the headline grabbing ‘homeless spice’ culture which dominates the landscape at Piccadilly, the narrative will give a voice to the least heard in our society, the voice of the marginalized, telling a different story – one of political social engagement and a desire to be heard.

The actors are not professional. Having experienced such increasingly common issues as homelessness, mental health problems, family breakdown and addictions, they embrace the opportunity to speak out about a plethora of issues. Months of long committed hours in drama workshops exploring techniques, devising the story and rehearsing, will culminate this weekend when they film with a large professional crew. The results will be seen at a premiere at Manchester’s HOME cinema before launching online.

My ethos has always been to work with local talent, giving opportunities to those who can find it difficult to get experience in the industry.

Directing the actors for this year’s Acting on Impulse production has been a really eye opening experience for me. It’s great to work with untrained actors and they have been refreshingly uninhibited, which has allowed us to freely explore different ideas taken from real situations. The project excites me because it gives a voice to those in society who don’t usually have one. To be a part of the Acting on Impulse movement is an honour.

Acting on Impulse has been working with homeless and socially excluded people since it was founded by Lauren Pouchly in 2007, coming up with new challenges and achievements for the actors every year. The characters, concept and storylines are developed through workshops with the aim of progressing broken lives and challenging public perceptions of people at the margins of society.

I have worked with the charity for 6 years as Education Officer, but had the privilege of working as Creative Producer and workshop leader this year. As we played around with themes from fairytales I was impressed and inspired from the outset by the actors’ awareness of topical and historic social issues and by their commitment to learn new skills and push themselves to the limit. Their focus and drive to excel individually, but also to create a supportive trusting environment is superb, in spite of their often turbulent and precarious lives.

This year has been special for me, not only because Acting on Impulse celebrates its tenth birthday, but because of the opportunity I have been given. The feeling of excitement around seeing their ideas develop over the year through workshops and into a film script is tangible. I can’t wait for them to see the result of their hard work when it screens in July.